Command: The Politics of Military Operations from Korea to Ukraine.

Sir Lawrence Freedman is the UK’s leading expert on military strategy and the go-to voice since Putin’s invasion of Ukraine for his clear-sighted analysis of the conflict.

On October 6 he comes to Intelligence Squared to discuss the themes of his new book Command: The Politics of Military Operations from Korea to Ukraine. Throughout history, he will explain, the concept of command – as both a way to achieve objectives and as an assertion of authority – has been essential to military action and leadership. But, as he will show, it is also deeply political.

Taking us through a wide range of conflicts since 1945 – from the French Colonial Wars, the Cuban Missile Crisis, the Falklands War, the Iraq War and Russia’s wars in Chechnya and Ukraine – he will explore the tension between military decision-making and civilian priorities and argue that commanders must now have the sensibility to navigate politics as well as warfare. He will examine issues such as insubordination and obedience, the tensions that can develop between the levels of command, and the significant differences between autocratic and democratic systems.

Freedman will also argue that Russia’s invasion of Ukraine has demonstrated the gap between formal command structures and the practice of war. And reflecting on the irony that President Putin’s nemesis, Volodymyr Zelensky, is a politician with no background in warfare, he will show that authority – whether among civilians or generals – is something to be earned, not taken for granted.

Join us for an unparalleled insight into the state of warfare in the 21st century.

Book bundles include one ticket for the online debate, plus a copy of
Command: The Politics of Military Operations from Korea to Ukraine by Lawrence Freedman  with free UK P&P. Books will be posted within 1-2 weeks of the event finishing. Click here to purchase a book bundle. 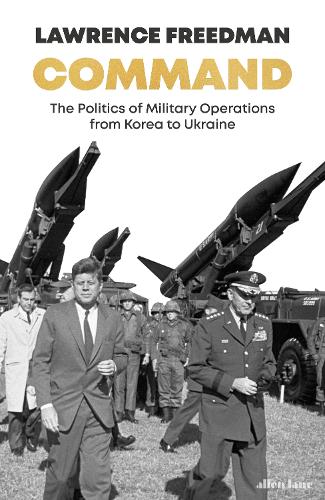 Command: The Politics of Military Operations from Korea to Ukraine.

Emeritus Professor of War Studies at King's College London and author of Command: The Politics of Military Operations from Korea to Ukraine

Emeritus Professor of War Studies at King's College London. He was the official historian of the Falklands Campaign, and a member of the official inquiry into Britain and the 2003 Iraq War ('the Chilcot Inquiry'). He has written extensively on nuclear strategy and the Cold War, and comments regularly on contemporary security issues. He is the author of The Future of War, Strategy, a Financial Times and Economist book of the year, and A Choice of Enemies: America Confronts the Middle East, which won the 2009 Lionel Gelber Prize and Duke of Westminster's Medal for Military Literature. His new book is  Command: The Politics of Military Operations from Korea to Ukraine.

Honorary professor at UCL SSEES and author of We Need To Talk About Putin: How the West gets him wrong

Honorary professor at UCL SSEES and senior associate fellow at the Royal United Services Institute. An expert on transnational crime and Russian security affairs, Galeotti has written numerous books including The Vory, We Need To Talk About Putin: How the West gets him wrong and The Weaponisation of Everything: A Field Guide to the New Way of War.