Alastair Campbell, the former Director of Communications for Prime Minister Tony Blair, was one of the most feared operators in British politics. Known for his short fuse, he was the basis for the obscenity-spewing character Malcolm Tucker in Armando Iannucci’s The Thick of It.

But there was always another Alastair Campbell – the vulnerable man behind the tough-guy persona, the one who struggled with alcoholism and depression. At the age of 29 he experienced a major stress-related breakdown after long periods of heavy drinking and intense overwork. He was arrested and hospitalised. Since then, he has intermittently struggled with bouts of depression and has become one of the nation’s best known campaigners for mental health awareness. According to Campbell, our society still isn’t taking mental health seriously enough. Recent research by Mind found that half of people in the UK who requested therapy had to wait more than three months. While waiting for therapy, 67% became more mentally unwell, 40% harmed themselves, and one in six attempted suicide.

In his new book Living Better: How I Learnt to Survive Depression, Campbell explores the impact of his depression on his professional and political life, as well as on those closest to him. His story is one of hope as well as pain. While Campbell speaks about the stigma, shame and taboo still associated with depression, he also examines how his successes may have been partly because of, rather than despite, his mental health problems.

Watch the event live and have your chance to type in your question during the Q and A.

Living Better: How I Learnt to Survive Depression by Alastair Campbell is available to pre-order now from Waterstones. 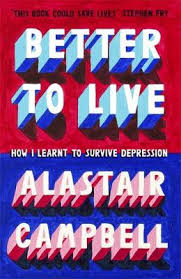 Tickets to this event are available only to Intelligence Squared+ subscribers.

Intelligence Squared+ subscriptions are just £4.99 per month (with the first month free) and include access to all of our interactive online events.

Former spokesman, campaign director and Downing Street Press Secretary for Prime Minister Tony Blair. He is the editor at large of The New European and chief interviewer for GQ magazine, and was formerly political editor of the Daily Mirror. He is an ambassador for Mind, Time To Change and a number of other mental health charities, and his book, Living Better: How I Learnt to Survive Depression, will be published in September.

Television and radio presenter, currently working for BBC Radio 5 Live. He is best known for his work on television shows such as Working Lunch, The Apprentice: You're Fired, The One Show, Daybreak, presenting football for MOTD2 and for ITV, and more recently for the series Our Coast on BBC2. His documentary about alcoholism, Drinkers Like Me, aired on BBC2 in 2018, and he has spoken candidly in media interviews and articles about his own struggles with anxiety and depression.