Postponed: Jim Al-Khalili on The World According to Physics

We are very sorry to inform you that in response to concerns about the COVID-19 outbreak the team at Intelligence Squared has made the decision to postpone this event.

We are planning on rescheduling the event for later this year, and will notify ticket holders as soon as we have a new date.

“The universe isn’t mysterious – there are just things about it that we don’t (yet) understand.” – Jim Al-Khalili

Why does physics matter? What can the study of energy and force, of matter and its motion and behaviour through space and time teach us about the universe and the nature of reality itself? According to Jim Al-Khalili, the renowned physics professor and host of BBC Radio 4’s The Life Scientific, we all need to understand the three pillars of modern physics — quantum theory, relativity and thermodynamics — if we are ever to have a full grasp of reality and our place in this universe.

For over two thousand years we have tried to understand how and why our world is the way it is: Where did it come from? What is it made of? How does it work? According to Al-Khalili, physics is a quest to answer these questions. And like the transformative discoveries in physics that the birth of quantum mechanics and relativity brought us a century ago — discoveries which altered the course of human history — Al-Khalili believes that we may soon be on the verge of another revolution in physics.

But there’s still so much that we don’t understand — we know very little about the nature of the dark energy that is ripping the universe apart, and we have no answers to fundamental questions like why there is more matter than antimatter, why the properties of the universe are so finely tuned to allow for stars, planets and life to exist, whether there are multiple universes or whether there was anything before the big bang.

These are all questions that Al-Khalili addresses in his new book The World According to Physics. Join us on Tuesday March 17 and hear him, in conversation with fellow physicist and science communicator Helen Czerski, discuss how physics both humbles and empowers us. 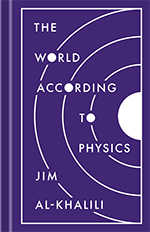 Postponed: Jim Al-Khalili on The World According to Physics

Broadcaster and Professor of Physics at the University of Surrey

Broadcaster and Professor of Physics at the University of Surrey. He is one of Britain's best-known science communicators and has written numerous books, including Quantum: A Guide for the Perplexed; The House of Wisdom: How Arabic Science Saved Ancient Knowledge and Gave Us the Renaissance; and Life on the Edge: The Coming of Age of Quantum Biology. His latest book is The World According To Physics. He is the host of The Life Scientific on BBC Radio 4. In 2016 he was the inaugural winner of the Stephen Hawking Medal for Science Communication.

One of the UK’s most popular science presenters

One of the UK’s most popular science presenters. Her many programmes for radio and TV include Radio 4’s Inside Science, Orbit: Earth’s Extraordinary Journey, numerous Horizon documentaries, The Sky at Night, and Dara O Briain’s Science Club. She is a Research Fellow at University College London, and holds a PhD in experimental explosives physics. She is the author of Storm In A Teacup: The Physics of Everyday Life.