Wirecard: The Inside Story of Europe's Biggest Financial Scandal, with Dan McCrum

When Financial Times journalist Dan McCrum followed a tip to investigate Wirecard, a hot new European tech startup challenging Silicon Valley, everything about the business – which claimed to be an innovative digital payments processor – struck him as too good to be true. Offices were sprouting up around the world, the company was reporting runaway growth and the CEO even wore a black turtleneck in tribute to Steve Jobs. In the space of a few short years, the company had come from nowhere to overtake industry giants like Commerzbank and Deutsche Bank on the stock market.

As McCrum dug deeper, he encountered a story stranger and more dangerous than he ever imagined: a world of short sellers and whistleblowers, pornographers and private militias, hackers and spies. Before long he realised that he wasn’t the only one in pursuit. Shadowy figures were following him through the streets of London, high-flying lawyers were sending ominous letters to his boss, and he was named as the prime suspect in a criminal inquiry. The race was on to prove his suspicions and clear his name.

On June 28 McCrum will come to Intelligence Squared to discuss his new book Money Men in which he reveals the astonishing inside story of Wirecard’s multi-billion-dollar fraud and his fight to expose the truth. Uncovering fake bank accounts, fake offices and possibly even a fake death, McCrum will lay bare one of the biggest financial scandals in German history what it tells us about the broader economy.

Book bundles include one ticket for the online debate, plus a copy of
Money Men: A Hot Startup, A Billion Dollar Fraud, A Fight for the Truth by Dan McCrum  with free UK P&P. Books will be posted within 1-2 weeks of the event finishing. Click here to purchase a book bundle. 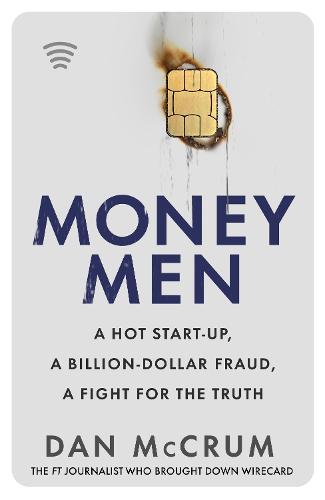 Wirecard: The Inside Story of Europe's Biggest Financial Scandal, with Dan McCrum

Award-winning investigative reporter for the Financial Times. His reporting on Wirecard has been recognised with prizes from the London Press Club, the Society of Editors, the New York Financial Writers' Association, the Overseas Press Club, and the Gerald Loeb awards. He was also awarded the Ludwig Erhard Prize for economic journalism, a Reporters Forum Reporterpreis and a special award by the Helmut Schmidt prize jury for investigative journalism. In 2020, he was named Journalist of the Year at the British Journalism Awards. Money Men is his first book.

Research Director, Centre for the Analysis of Social Media (CASM) at the think tank Demos

Research Director and co-founder of the Centre for the Analysis of Social Media (CASM) at the think tank Demos. He is a Senior Fellow at the Institute of Strategic Dialogue, a Visiting Research Fellow at King’s College London and a Commissioner of Newham’s Democracy and Civic Participation Commission. He presents the BBC's flagship technology programme 'Click' and is author of The Death of the Gods: The New Global Power Grab.