Noam Chomsky is one of the world’s most influential political commentators, widely admired – and widely criticised – for his decades of anti-imperialist writing and activism.

Now he turns his attention to the greatest challenge that has ever faced humanity – the environmental crisis. And with leading economist Robert Pollin he comes to Intelligence Squared to talk about the themes of the new book they have written together, The Climate Crisis and the Global Green New Deal.

Chomsky and Pollin will argue that the leaders of the US, the most powerful state in human history, are dedicating themselves with a passion to destroying the prospects for organised human life. At the same time, the authors argue, there is a solution at hand, which is the Green New Deal.

Putting meat on the bones of the Green New Deal starts with a simple idea: we have to stop burning fossil fuels to produce energy within the next thirty years at most. But the Green New Deal will fail if it doesn’t protect the jobs and livelihoods of working people and support rising living standards for the poor throughout the world. The programme is entirely realistic in terms of its economic and technical features, say Chomsky and Pollin. But is it politically feasible? And what do we need to do to build the political force to make a global Green New Deal a reality?

Join us on September 29 as Chomsky and Pollin set out their solutions to the climate crisis and encourage us all to think about what we are doing as individuals to bring about the transformation we so urgently need.

Climate Crisis and the Global Green New Deal: The Political Economy of Saving the Planet by Noam Chomsky and Robert Pollin is available to pre-order by clicking the book jacket below. 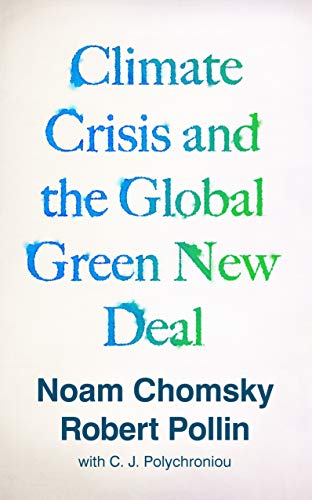 You can get access to this event and many more by subscribing to Intelligence Squared+ from just £4.99 per month.

Professor of Linguistics and Philosophy at MIT and political commentator

Institute Professor in the Department of Linguistics and Philosophy at the Massachusetts Institute of Technology. He is the author of American Power and the New Mandarins, Manufacturing Consent (with Ed Herman), Deterring Democracy, Year 501, World Orders Old and New, Powers and Prospects, Profit over People, The New Military Humanism and Rogue States.

Professor of Economics at the University of Massachusetts-Amherst

Professor of Economics and founding Co-Director of the Political Economy Research Institute (PERI) at the University of Massachusetts-Amherst. Among his many books are The Living Wage (with Stephanie Luce) and the edited volume Transforming the US Financial System (with Gary Dymski and Gerald Epstein). He has worked with the Joint Economic Committee of the US Congress and the United Nations Development Program, and was the economic spokesperson for the 1992 presidential campaign of Governor Jerry Brown.