How The West Can Stop Putin, with Exiled Critic Mikhail Khodorkovsky

Mikhail Khodorkovsky has experienced first hand the wrath of Vladimir Putin. Once an oil tycoon and the richest man in Russia, Khodorkovsky was arrested at gunpoint before parliamentary elections in 2003, stripped of his oil wealth and jailed on politically motivated charges of fraud and tax evasion after funding opposition parties.

Khodorkovsky spent nearly ten years in prison. In order to secure his freedom and get permission to see his terminally ill mother he wrote Putin a handwritten letter, making three promises: he would leave Russia to spend time with his family; he would stay away from politics; and he would not attempt to win back his shares in Yukos – his dismantled oil company – or get involved in any court cases.

But after the death of his mother in 2013 Khodorkovsky began to publicly criticise Putin once more and, while in exile, started calling for pro-democracy reforms in Russia. He is now one of Putin’s most influential critics.

On September 8 Khodorkovsky comes to Intelligence Squared to share his unparalleled insight into the inner workings of Putin’s regime and how the Russian president wields power at home and abroad. Drawing from his new book The Russia Conundrum Khodorkovsky will reveal previously unknown information about his own life to show how Russia really works and how the West can truly begin to blunt the Kremlin’s imperial ambitions.

Join us live in-person or online for a unique insight into modern Russia and how the West should deal with it. Khodorkovsky will be joined in conversation by his co-author Martin Sixsmith, Sunday Times bestselling author and former BBC Moscow correspondent.

Book bundles include one ticket for the debate, plus a copy of The Russia Conundrum: How the West Fell For Putin’s Power Gambit – and How to Fix It by Mikhail Khodorkovsky  with free UK P&P. Books will be posted within 1-2 weeks of the event finishing. Click here to purchase a book bundle. 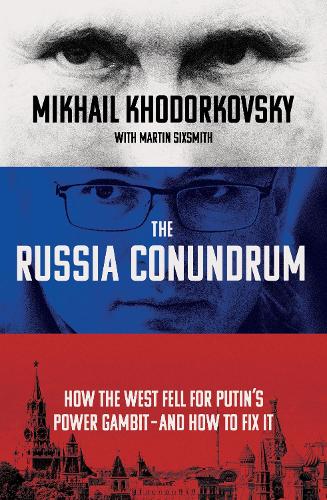 How The West Can Stop Putin, with Exiled Critic Mikhail Khodorkovsky

Click below to buy tickets to attend the event in-person or buy tickets for the livestream.

Intelligence Squared+ subscribers get access to all live-streamed events, plus a 15% discount on in-person tickets and a host of other perks. For more information and to subscribe please click here.

Exiled Russian dissident and author of the new book The Russia Conundrum: How the West Fell For Putin’s Power Gambit – and How to Fix It

Exiled Russian dissident and founder of Open Russia, a movement committed to promoting democratic reform in Russia. He was formerly head of YUKOS, Russia's largest private oil company and the country's richest man. He was arrested in 2003 and imprisoned on charges of tax evasion and fraud, charges which he denied and vigorously defended. Khodorkovsky was sentenced to 14 years in prison. He was declared a prisoner of conscience by Amnesty International and finally released after ten years in December 2013. He is the author of the new book The Russia Conundrum: How the West Fell For Putin’s Power Gambit – and How to Fix It.

Journalist, writer and former BBC correspondent in Moscow, Washington, Brussels and Warsaw. From 1997 to 2002 he worked for the Blair government as Director of Communications and Press Secretary to several cabinet ministers. He is the author of non-fiction titles including Russia - the Wild East, Putin's Oil, The Litvinenko File and The War of Nerves. His bestselling 2009 book, The Lost Child of Philomena Lee, was adapted for film and became the multiple Oscar-nominated Philomena, starring Steve Coogan and Judi Dench.