To anyone who has been following the debates over race in America, John McWhorter needs little introduction. A professor of linguistics at Columbia University and New York Times columnist, McWhorter believes that his fellow Blacks are being harmed by a new form of antiracism, mostly espoused by white elites, that is illiberal, illogical and at heart neo-racist.

On January 24 McWhorter comes to Intelligence Squared to discuss the themes of his new book Woke Racism. He will argue that some of the recent bestselling books, such as Robin DiAngelo’s White Fragility and Ibram X. Kendi’s How to Be an Antiracist, espouse tenets that are both contradictory and unachievable: When white people leave areas with a large Black population it is called white flight, but when white people move into a Black neighbourhood it’s called gentrification; Black people cannot be held accountable for everything every Black person does, but all white people must acknowledge their personal complicity in the historical crimes of ‘whiteness’.

To McWhorter, such thinking is not just a political stance but a religion with all the hallmarks of Christian dogma: white privilege as original sin that cannot be expunged; the hounding out of dissenters as heretics; the evangelical fervour of the true believers. And he holds that this thinking embodies a racial essentialism that is barely distinguishable from racist arguments of the past – such as the proposal that to be antiracist, teachers should not expect Black students to aspire to goals such as precision, punctuality and objectivity, because these are characteristics of white culture.

McWhorter acknowledges the heartfelt desire of white people to be allies to racial minorities and their belief that they are helping to address the wrongs of America’s racist past and present. But, arguing that there is a better way to improve Black lives than what he sees as an unproductive focus on abstract theory, he will set out a concrete roadmap of reform that he believes will genuinely reduce racial disparities.

Is the modern antiracist movement hurting Black people? Join us, hear the arguments and decide for yourself.

‘Scathingly brilliant and strawman-killing from the get-go, Woke Racism will make you stop in your tracks no matter what your politics are – and very possibly reexamine some of your deepest held convictions. Masterfully and beautifully written, this book is a powerful appeal for common sense.’ – Amy Chua, professor at Yale Law School and author of Battle Hymn of the Tiger Mother and Political Tribes

Book bundles include one ticket for the online debate, plus a copy of Woke Racism by John McWhorter with free UK P&P. Books will be posted within 1-2 weeks of the event finishing. Click here to purchase a book bundle. 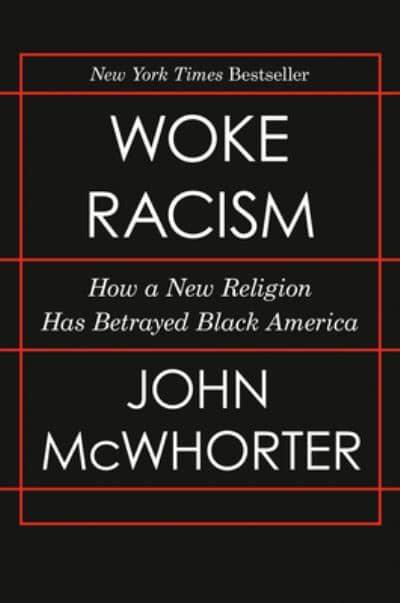 Professor of linguistics at Columbia University and bestselling author

Professor of linguistics at Columbia University, where he also teaches American studies and music history. He writes a twice-weekly column for The New York Times and is host of the language podcast Lexicon Valley. His writing has also been published in The New Yorker, The Wall Street Journal, Time, The Daily Beast, The New Republic, The Root, and many other outlets. McWhorter is the author of over twenty books, including Nine Nasty Words: English in the Gutter – Then, Now and Forever; The Power of Babel; Losing the Race; and Our Magnificent Bastard Tongue. His latest book is Woke Racism: How a New Religion Has Betrayed Black America.

Staff writer on The Atlantic and former associate editor of the New Statesman. She presents The Spark on BBC Radio 4, in which she interviews radical thinkers on their solutions to the structural problems of our age.  Her first book is Difficult Women: A History of Feminism in 11 Fights.