Fear is on the march. All over the world citizens have surrendered basic freedoms to the state in order to be protected from Covid-19. Good government has become not just important but a matter of life and death. But the assumption that Western governments have any advantage over the rest of the world is questionable: ask yourself, where would you feel safer today – in Los Angeles and Barcelona or in Singapore and Seoul?

The pandemic has exposed the weaknesses of the West, argue bestselling authors John Micklethwait and Adrian Wooldridge, and it is accelerating a shift in the balance of power to the East. While Western democracies have been consumed by in-fights such as the battle over Brexit or partisan showdowns in Congress, countries such as South Korea, Singapore, Taiwan, as well as China, have been stealing a march economically, technologically and, arguably, politically in recent years.

On October 8 Micklethwait and Wooldridge come to Intelligence Squared to talk about the themes of their new book, The Wake Up Call. What are the lessons to be learned from the pandemic? Should we recognise, as many on the Left maintain, that big government is back for good and should be expanded permanently to deal with other global crises? Or should a balance be struck between collectivism on the one hand, and freedom and entrepreneurialism on the other? And how can the West respond creatively to the pandemic, reverse decades of decline, and ensure that China does not overtake the US in the struggle for global leadership?

Can the West rise to the challenge posed by the greatest crisis since the Second World War? Join us as two of Britain’s best known political journalists set out their arguments and have your chance to put your questions to them live.

Praise for The Wake Up Call

‘You will read no more interesting book on the political consequences of the pandemic than this.’ – Professor Niall Ferguson

‘A masterful analysis of Western failure, and a clear program for the future.’ – Anne Applebaum

The Wake Up Call: Why the Pandemic Has Exposed the Weakness of the West – and How to Fix it by John Micklethwait and Adrian Wooldridge is available to buy from Waterstones. 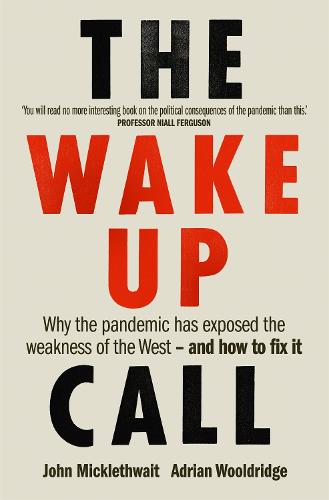 You can get access to this event and many more by subscribing to Intelligence Squared+ from just £4.99 per month.

Authors of The Wake Up Call: Why the Pandemic Has Exposed the Weakness of the West – and How to Fix it

John Micklethwait is editor-in-chief of Bloomberg News; Adrian Wooldridge is the political editor of the Economist and author of its Bagehot column. They have written six previous books together: The Fourth Revolution: The Global Race to Reinvent the State; Company: A Short History of a Revolutionary Idea; A Future Perfect: The Challenge and Promise of Globalization; The Witchdoctors: Making Sense of the Management Gurus; The Right Nation: Why America is Different; and God is Back: How the Global Rise of Faith is Changing the World. Their forthcoming publication is the essay The Wake Up Call: Why the Pandemic Has Exposed the Weakness of the West – and How to Fix it.