‘It is among my proudest boasts that I was a massive Rundell fan before she became a national treasure.’ – Dan Snow

Katherine Rundell is fast becoming one of the great writers and storytellers of our age. Already a successful children’s author, she has now turned her attention to the natural world and with her customary charm, wit and panache she asks us to look at the living things around us and to wonder. In her new book The Golden Mole: and Other Living Treasure she has created a glorious menagerie of the world’s most extraordinary and vulnerable animals. A swift flies two million kilometres in its lifetime, enough to get to the moon and back twice over – and then once more to the moon. A pangolin’s tongue is longer than its body; it keeps it furled in a pouch by its hip. A Greenland shark can live five hundred years. A wombat once inspired a love poem. Every species in the book is endangered, or contains a subspecies which is endangered, because of the destruction that we humans have wreaked on their ecosystems.

On December 19 Rundell comes to Intelligence Squared where she will be in conversation with environmental historian and broadcaster Eleanor Rosamund Barraclough. Join us as Rundell urges us to look at and to love the beauty of our world, its fragility, and its strangeness. For, as she puts it, ‘love, allied to attention, will be urgently needed in the years to come.’

Book bundles include one ticket for the online debate, plus a paperback copy of The Golden Mole: and Other Living Treasure by Katherine Rundell  with free UK P&P. Books will be posted within 1-2 weeks of the event finishing. Click here to purchase a book bundle. 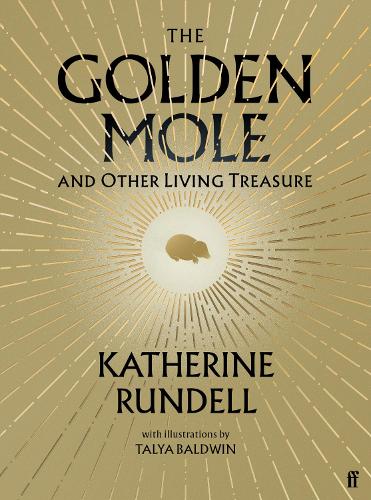 Fellow of All Souls College, Oxford, and author

Fellow of All Souls College, Oxford. Her books for children have been translated into more than thirty languages and have won multiple awards. Rundell is also the author of adult books, including the Sunday Times bestsellers Super-Infinite: The Transformations of John Donne and Why You Should Read Children’s Books, Even Though You Are So Old and Wise. She has written for, among others, the London Review of Books, The Times Literary Supplement, The New York Review of Books and The New York Times: mostly about books and animals, though sometimes about night climbing and tightrope walking.

Environmental Historian at Bath Spa University, Fellow of the Royal Historical Society and Fellow of the Society of Antiquaries. As a broadcaster, she regularly appears on BBC Radio 3 and 4 (Free Thinking, Costing the Earth, Sunday Feature, Essential Classics, The Essay, On Your Farm, Open Country) and occasionally on BBC4 (Beyond the Walls: In Search of the Celts). She has been a judge for the Costa Book Awards and has written for publications including The Guardian, The Independent, The Telegraph, BBC History Magazine and BBC Countryfile Magazine. She is author of Beyond the Northlands: Viking Voyages and the Old Norse Sagas.