Sam McAlister: Behind the Scenes of the BBC's Most Unforgettable Interviews

Sam McAlister is the woman who secured the infamous Newsnight interview with Prince Andrew, when he claimed to Emily Maitlis that he was in a Pizza Express in Woking on the night Virginia Giuffre alleges he slept with her. The interview made headlines around the world and had a serious impact on the Royal Family.

McAlister was the first person in her family to go to university, and is a trained barrister, a single mother and a master of persuasion. In her former BBC colleagues’ words, she was the ‘booker extraordinaire’, responsible for many of Newsnight’s exclusives over the past decade, including Stormy Daniels, Sean Spicer, Steven Seagal and Julian Assange.

On August 18 she comes to Intelligence Squared to mark the publication of her new book Scoops: Behind the Scenes of the BBC’s Most Shocking Interviews. As well as describing her encounters with power and celebrity, she will explain how the best news gets made, the changes happening at the BBC, the future of mainstream media in the age of clickbait and the role of power and privilege in shaping our media landscape. And she will share her top tips for persuading people to do something for you – and reveal the negotiation skills she honed in order to produce some of the most unforgettable journalism of our times.

Praise for Scoops: Behind the Scenes of the BBC’s Most Shocking Interviews

‘Sam delivers where others fail. She has a zinger of a story to tell’ – Huw Edwards

‘Even though we know what happened, McAlister’s eye-witness description of the royal car-crash retains the power to shock… riveting.’ – Sunday Telegraph

Book bundles include one ticket for the online debate, plus a copy of
Scoops: Behind the Scenes of the BBC’s Most Shocking Interviews by Sam McAlister  with free UK P&P. Books will be posted within 1-2 weeks of the event finishing. Click here to purchase a book bundle. 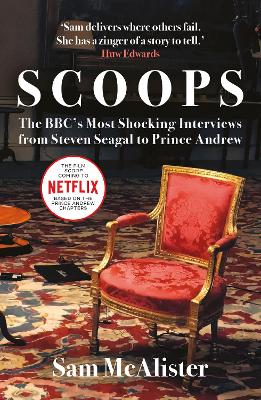 Sam McAlister: Behind the Scenes of the BBC's Most Unforgettable Interviews

BAFTA-nominated interviews producer on BBC 2's flagship news programme Newsnight from 2010 to 2021 and author of Scoops: Behind the Scenes of the BBC's Most Shocking Interviews

Broadcast journalist who currently she has her own daily talk and phone-in show on TalkTV. Previously she worked for ITV, Channel 5, CBS News, Sky, LBC and the BBC.  She is a decorated war reporter having spent several years reporting from Bosnia, Somalia, Northern Ireland and Cyprus.