This event has now finished and is available to watch on demand.

Intelligence Squared welcomed Tony Blair and Andrew Adonis in an online event to mark the publication of Adonis’ new biography of Ernest Bevin, one of the giants of Labour Party history. Often overshadowed by his near namesake Nye Bevan, who will forever be associated with the creation of the NHS, Bevin was arguably the more important and inspirational figure. An orphaned farm boy with almost no formal education, he started work aged 11 and rose to become the first general secretary of the Transport and General Workers’ Union in 1922. Minister of Labour in the wartime coalition during the Second World War, he was Churchill’s de facto deputy, masterminding the home front while the prime minister commanded the battle front. After the war he was Foreign Secretary at one of the most pivotal moments of international history, helping to keep Stalin and communism out of Western Europe, and playing a central role in the creation of West Germany, NATO and the transatlantic alliance, all of which underpin European democracy and security to this day.

In this rare public appearance together, chaired by the BBC’s Rajini Vaidyanathan, the former Labour prime minister and cabinet minister discussed how the man known as ‘the working-class John Bull’ grew to become one of this country’s greatest political leaders and what lessons can be learned from his legacy today.

Ernest Bevin: Labour’s Churchill by Andrew Adonis is available to order from Waterstones. 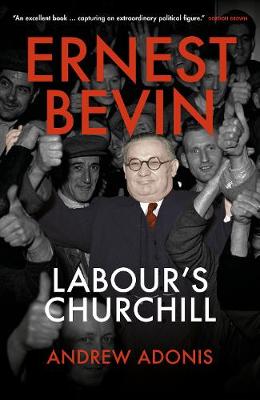 Executive Chairman of the Institute for Global Change and Former Prime Minister of Great Britain and Northern Ireland – the only Labour leader in the party’s 100-year history to win three consecutive elections. Since leaving office Tony Blair has spent most of his time working on three areas: supporting governments to deliver effectively for their people, working for peace in the Middle East, and countering extremism. He established the Tony Blair Institute for Global Change to work on some of the most difficult challenges in the world today, believing that real leadership has never been more necessary or more difficult. Currently, teams from his Institute are directly supporting leaders across the globe in their fight against Covid-19, as well as delivering analysis and advice to help countries mitigate the economic impact, source essential equipment, harness the power of technology and position themselves for the rebuilding to come.

Andrew Adonis was at the heart of the Blair-Brown government for twelve years, serving as Minister for Schools under Tony Blair and as Transport Secretary in Gordon Brown's cabinet. Formerly he was a journalist at The Observer and the Financial Times and a Fellow of Nuffield College, Oxford. His previous books include 5 Days in May, acclaimed as a 'West Wing-style thriller' about the formation of the Cameron-Clegg coalition. A member of the House of Lords, he has twice been named Peer of the Year in the Channel 4 and Spectator awards.

BBC Correspondent and anchor. Currently South Asia Correspondent, her brief includes India, Sri Lanka, Bangladesh, Afghanistan, Nepal and more. Recent stories include the Indian elections, Delhi riots, President Trump’s visit to India, the Sri Lanka terror attacks and an interview with the Dalai Lama. She’s also worked on investigations including a Panorama on fake call centres, and a BBC Our World on child trafficking in India. She was previously Washington Correspondent and anchor, where she covered the 2016 campaign, election and presidency of Donald Trump and anchored from presidential debates and conventions. Before that she reported on the election of Barack Obama, and the US financial crisis. Rajini has also reported extensively on race in America, including from Ferguson and Baltimore, and fronted a four-part radio documentary looking deeper into the issue. Earlier in her career, she spent several years as a political correspondent in Westminster, where she won an award for her interviews with party leaders.